Our management team have many years experience in their individual roles, and working together, enabling us to bring you an end to end customer service journey. 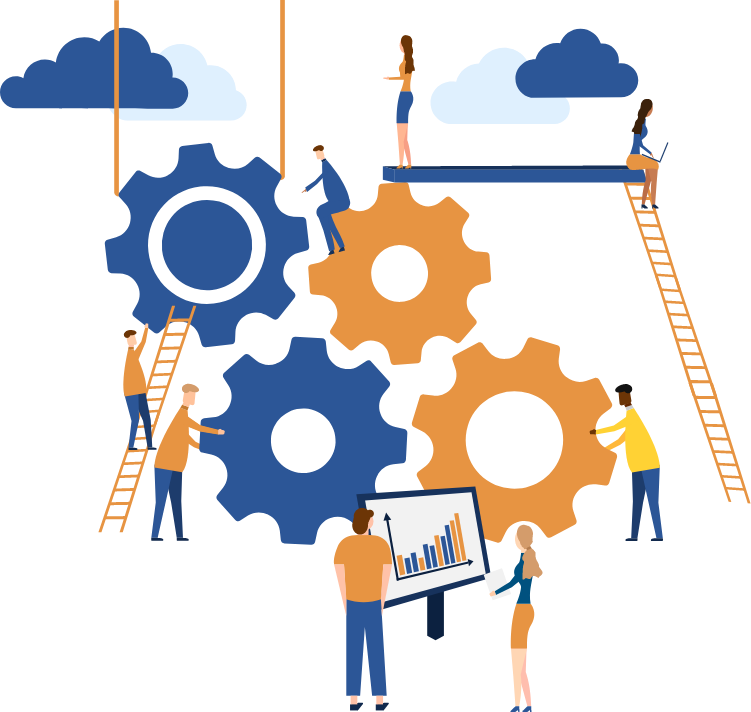 James is a founder shareholder with G7, and became a Director in April 2014. As our ERP Services Director, James leads and develops both our Consulting and AMS teams.

After starting life as a programmer with YJ Lovell Holding Plc, developing finance systems, James then moved into a systems analysis role. He also trained as a property management surveyor, taking on the responsibility for a property portfolio and their financials.

Away from business systems, you might find James watching his beloved West Ham (he’s a season-ticket holder) or Middlesex CCC. He also completed the London Marathon on his 18th birthday – which means he has an unbreakable record as the youngest ever participant!

After starting her working life in operations, then as a programmer, Julie moved into training and support on the Sun Accounts and Dillon systems and then into sales for a number of years – including working for an end user training provider. As an NLP certified trainer, Julie also ran her own company, offering change management skills and soft skills training to organisations and individuals. From here, Julie moved into bid and project management, gaining PRINCE II and APMP accreditation.

Julie’s role is to enhance and expand G7 services for the benefit of both existing and new business streams. Julie is also responsible for new sales and account management within G7, and is your first point of contact for any queries.

Away from G7, Julie is into her cars. Spending time at car meets and also on race tracks or drag strips, racing her Mustang 5 litre!

Mark was one of the original founders of G7.

He has extensive experience in programming and technical services, and his main role at G7 is Services and HR Director.

Early in his career, Mark worked in computer operations, and progressed into a technical programming role working for a number of different companies on various technologies. While at YJ Lovell’s, Mark designed and built a bespoke HR/Payroll system paying over 1500 hourly, weekly and monthly paid employees. He then developed a specialism in Lawson, and became Technical Services Manager at the Jon Hawkins Partnership, before the emergence of G7.

Since 2001 Mark has led G7’s work with Lawson, and has more recently assisted in the dynamic growth realised by the G7 Unit4 ERP practice. He is also an accredited PRINCE II Practitioner, and a keen follower of Middlesex CCC and Wasps RFC.

To take up the opportunity of more direct input into projects, Juliette joined G7 in 2016 having spent seventeen years at Unit4.

Juliette previously worked in a variety of roles across multiple industries, resulting in a flexible approach to finding solutions rather than being tied to one path. During her time in Unit4, initially as a member of their development team, Juliette worked in the project office, customer support and finally as training co-ordinator.

Outside work, Juliette is an avid supporter of Bristol Rovers football club and is keen on country and coastal walks, usually accompanied by her dog, Wilson.

Shelley has been with G7 since 2001, and previously with the team at John Hawkins Partnership.

Shelley’s role involves preparing the management accounts and all other bookkeeping and accounting duties for the company.

Outside of work, Shelley enjoys Pilates and DIY home projects.

Jayne has been with G7 since January 2020, having spent nearly fifteen years at Unit4.

Jayne trained as a corporate lawyer initially, then moved to work in house for software companies including Civica, Idox, Unit4 and most recently Advanced. She has experience in all types of intellectual property work and commercial contracts, including large public sector frameworks and has worked within both the UK and wider global marketplace. Jayne’s role is to ensure that G7 remains compliant with all relevant legislation and the ever changing software and related services marketplace.

Jayne loves pottering around in her Victorian greenhouse, with some 80’s tunes on the radio and has had some success with her broccoli this year. To escape the high life of the countryside, she likes to sit and watch the world go by on Marylebone High Street. Her greatest achievement is her daughter Emily 12.

Information on our products, people & more.

Thanks for your submission, we will be in touch soon!

Something went wrong. Please check your entries and try again.